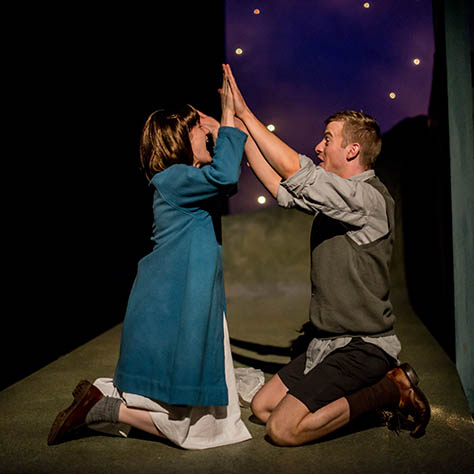 Posted by Theatr Genedlaethol in Uncategorized

After months of developing the technology, creating the content, and setting it around the stage production, I had the chance to trial the Sibrwd app during the tour of Y Negesydd in May this year. Following an open invitation, four groups of individuals were selected to trial Sibrwd at four live performances of Caryl Lewis’s new play.
Simply put, the purpose of Sibrwd is to allow people who are not fluent in Welsh to enjoy theatre in Welsh. So far, surtitles and synopsis cards have been used but there are disadvantages to both: for example, surtitles can disrupt the experience of those who understand Welsh and synopsis cards can disrupt the plot. Through an app on a mobile phone, Sibrwd provides a quiet summary in English of what is happening in the English dialogue without disturbing the experience of anyone in the audience.
So, does Sibrwd work? Did the four groups have a satisfactory theatrical experience? Did the device do the job?
Group 1 were advanced learners – that could speak Welsh well enough to be able to discuss the app in a Welsh language focus group. Groups 2 and 3 were also learning Welsh, but on a lower level, and Group 4 were non-Welsh speakers.
The response from all groups was that the device worked for them, and to their specific knowledge of Welsh. An interesting discovery considering that the levels of the four groups were different. Therefore, one stream suited everyone. Secondly, some people were using the text stream though a voice stream is the main concept behind Sibrwd. The text stream was especially useful for one who was slightly hard of hearing. This was a new factor for us as a research team as well as the development team; therefore there is further use again for the device.
Though the voice (and text) were recorded beforehand, the cues were live. The groups’ response to the timing was that there should be enough Sibrwd stream at the beginning, in order to for people to have faith in the technology. It was also important that the Sibrwd feed didn’t interrupt dramatic and quiet moments on stage. And interestingly, there wasn’t a clear opinion whether the English Sibrwd should come before or after the dialogue in Welsh.
I had never seen five performances of the same production before, and in four different locations. It was an eye opener to see different audiences’ reactions to a piece of theatre. One very striking thing with Y Negesydd was at what points in the play the audiences laughed. For example, there was more laughter in Felinfach (where the play is set) that at Galeri Caernarfon.
Some Sibrwd users said that the audience had laughed in some places where the joke had not come across in Sibrwd. This will be a challenge therefore as Sibrwd is developed, considering the varying reactions from audiences to a live performance, especially regarding humour.
One other thing that didn’t occur exactly as we predicted. Considering the emphasis put on North Wales Welsh and South Wales Welsh in the world of Welsh for Adults, not one member of the learner groups commented on the dialect of this particular play. The depth of the Ceredigion language didn’t faze them at all; it was ‘It’s all Welsh to me’ on the whole. Is there a lesson here?
For the learners too, going to the theatre with Sibrwd like a ‘friend in your pocket’ or ‘safety net’ worked for them, but going with their class was a way of opening a door to new experiences. Walking in to a theatre – where you can’t use the ‘off’ switch or walk away – was more comfortable in the company of the class. Theatre is a social activity in its essence, isn’t it?
The next stage of trials will happen as part of Dyled Eileen at the Eisteddfod. This time, the context and direction of the drama will be an interesting thing to explore.
Whilst the technology is tested over the coming months, the big question then will be, how to change a culture so that people who are less fluent in Welsh, or non-Welsh speakers, can access Welsh language theatre. Theatre companies, theatres and Welsh venues will have to seriously consider how their marketing strategies can transfer the message to this new audience, that the technology is now available, to open up Welsh theatre to anyone.